Day #8- December 8th- Favorite 8 of 12 - Yoga Shelter SoCal
So let me tell you a story...Once upon a time there was a guy that for years heard that Yoga was "good for you."  He had tried yoga here and there, but never really connected, or liked it.  Something weird about it, something hippy-ish and uncomfortable and oddly feminine.  Then one day Groupon offered a coupon for yoga classes from a local Studio City business called Yoga Shelter (they also have five locations in Michigan) and this guy thought, "Alright, I'll try again."  He did, and he ended up not only loving his experiences there but finally understanding WHY yoga is so great!  Now, he loves yoga and posts things on facebook and his blog and other places encouraging others to try it!
True Story! :)
I encourage anyone local to Studio City (or anyone who lives in Michigan) to check out Yoga Shelter!  It's an amazing place, with an amazing supportive energy.  AND, you'll get all the amazing health benefits of what yoga does for your body...and to be honest, that's really just the icing on the cake for what it does mentally and spiritually for you!  If you are not local to Yoga Shelter, I encourage you to try yoga (a couple of times) it might change your life.  Or you might just have a great workout!
This quote, by T. Guillemets, says it best, "A photographer gets people to pose for him. A yoga instructor gets people to pose for themselves."
Check out Yoga Shelter and support them on facebook: Yoga Shelter
And Yoga Shelter on Facebook 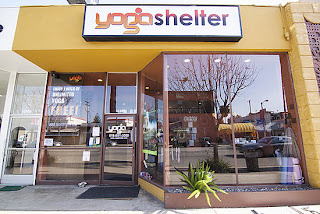 Posted by GetPaulHoward.com at 7:56 AM