My thoughts on Michael Jackson One by Cirque du Soleil

I had the opportunity to see this show on it's first preview, last night, May 23rd, and have written my thoughts on the show.
Directly below is a quick review and then under the photo of me, the full review and more photos from the show.  Enjoy!!
Paul


Michael Jackson One by Cirque du Soleil is an entertaining and original musical journey to no where in particular, but honestly, you don't care that much because the whole time your eyes and ears are being thoroughly entertained.  The show is full of surprises and thrilling moments, but still feels like it's missing something...or someone. It comes close though, and a huge improvement from Immortal (the first MJ & Cirque show, currently still touring in Europe), I highly recommend everyONE check Michael Jackson One out for an enjoyable evening of dance, music, memories, stunts, and a reminder as to the talented man we lost too soon. 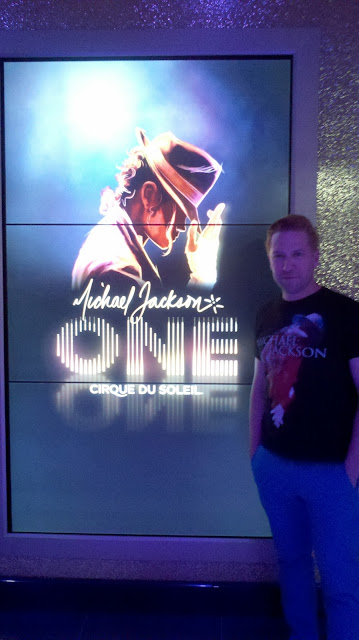 The show really begins as soon as you enter the new Michael Jackson Theater in Mandalay Bay Hotel and Casino.  Images and references of the King of Pop can be found everywhere.  Drinks with cute names (I recommend the Moon Walk, a tequila based drink with pomegranate juice and lemonade), the initials MJ built in to the bar design, even the wallpaper pays tribute, listing his many iconic (and even lesser known) song titles.  On the night I attended (the show was still in previews and not officially open so I'm not sure if this is something permanent) there was a photo area set up with a backdrop, for people to take their picture.  But this is Michael Jackson, so the photo area comes equipped with multiple paparazzi cameras automatically clicking and flashing and making a type of foreboding sound, something Michael would have liked, if for no other reason, to give the audience a taste of what fame really means to the world's most famous man.  In fact, many elements of the show, especially at the beginning, deal with this issue.  Fame, and the price of fame. 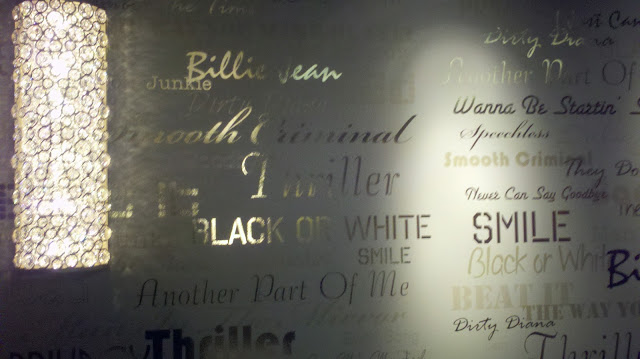 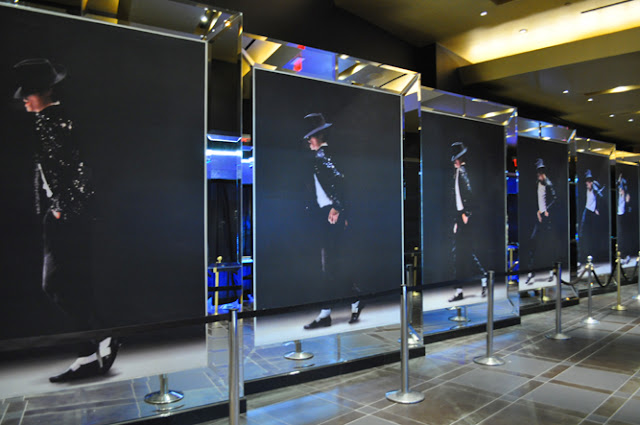 Once within the theatre there is still plenty to see, and plenty that keeps with the theme of paparazzi vs. fame.  The stage is large but nothing to write home about, certainly not one of the larger stages that Cirque has here in Las Vegas.  Fairly traditional at first view, it has a simple stage area and two catwalks thrusting out to both sides of the audience, framing the lower seating (and it's audience members) in to the coming action.  Above these catwalks however are large state of the art screens that are a huge part of the show and as the audience gets seated, these screens project insane and silly tabloid headings from fake newspapers and National Enquirer-isc publications.  The publications have photos of random people attached to each headline, and keep changing.  It was only after a few minutes that I realized these people on the screen were audience members sitting in the theatre!  The show strives to include the audience and make us a part of the world they are about to present.  This helps to heighten that connection.  As part of the pre show entertainment (a Cirque tradition) there are stalking, but stylish, Paparazzi Men creeping around.  All of them styled as some sort of 1930's gangster (if they wore black sunglasses, blood red hats and matching suits in the 30's!).  Probably a more accurate comparison would be to Michael's Smooth Criminal music video.  Clearly the wardrobe styling throughout the show pays tribute and takes multiple pages from Michael's wardrobe book.  I was impressed throughout the show at different costumes that were reminiscent of Michael, but totally original.  The styling and costumes of the show aren't stolen or copied, they are more re-imagined and pay tribute to.  I could easily image Michael rocking many of the outfits in the show, even though in his life, he never did.  For the pre show action, these gangster paparazzi stalk the audience (always staying in a group, like a hive of bees, more powerful and frightening in numbers) they take pictures of different people and those images soon appear on the big screens for all to see.  A convention so appropriate for our Facebook world and one that Michael would have loved.
Besides the screens on the side (and on the proscenium of the stage) there is transparent curtain/screen covering the majority of the stage (hiding the many surprises to come).  On the screen, there are images projected, there is a stool, Michael's fedora, his sequined glove, his penny loafer shoes and sequined socks, all items that will come in to play later and throughout the show.  Before the show though they float and circle, kept in a sort of force field.  Waiting. 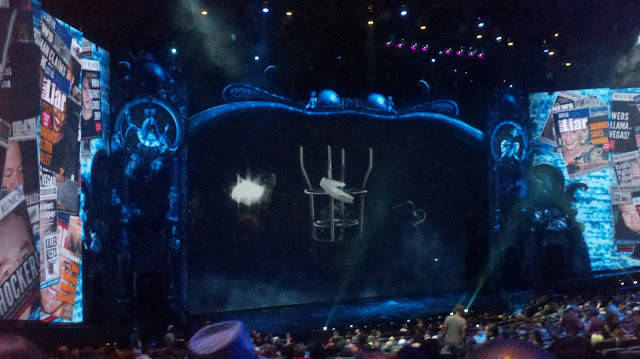 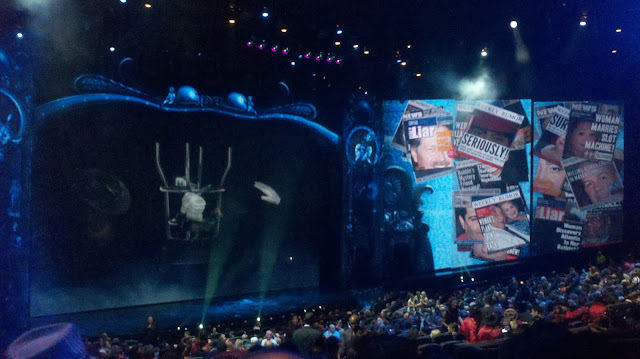 Then the show begins...a visual assault of color, of dance, music videos, clips, acrobatics, stunts, and then more dancing.  The show is also an audio assault on your ears.  Before the first full song is played (a fact different from the Immortal show, there are less mash ups and less clips here) there is a barrage of Michael's yells, words, threats/pleas ("I always feel like somebody's watching me) sound effects, and songs and this is in addition to all the images quickly flashing on the various screens.  I found it hard to focus at first.  Truly, a sensory overload!
The first few songs of the show continue the darker themes of the price of fame, themes that are in a lot of Michael's music.  Beat It, Tabloid Junkie, Too Bad are all used as great examples of Michael's rage and darkness, but this is a natural choice for the show since his catalog has so much to pull from, especially with the darker themes.  Plus these themes give the creators a brilliant canvas to build on and from.  I actually feel that the show is strongest in it's darker moments.
The show does lighten up though as it continues, and by the end, the audience is on their feet and dancing!  For as much as Michael had darkness, he also had songs like Rock with You and The Way You Make Me Feel (both in the show) that you can't help but tap your foot to and smile at.
The theater is designed with speakers on all the seats and this helps to immerse you in the music but also gives the show the ability to make you feel like the music is moving or that Michael is there, within the audience.  The music really becomes the "star" of the show, as it should be, even though all the performers are working hard and kicking ass... and at an almost manic pace.  This is the only Cirque show that I have seen (and I've seen quite a few now) where I felt like the performers were so high energy, that they might explode (or hurt themselves)!  At times, it almost feels unrehearsed in it's franticness, but ultimately it blends seamlessly with Michael's music and makes sense for the show as a whole.

Without giving away too much about the show, here are some more details on some sequences of the show, but don't worry, I won't give you any spoilers!  Tabloid Junkie faces head-on the Jackson newsprint rumor factory. Headlines projected on the walls write of his attempt to buy the "Elephant Man's bones" and Joseph Merrick's skeleton stands there on the stage. Michael's supposed oxygen chamber is also wheeled across the stage. Stranger in Moscow (one of my favorite moments of the show, and not just because it's one of Michael's best, although lesser known songs, spotlights a flown-in crescent moon lady and an aerialist. Behind him drifts snow and ghostly images of Liz Taylor, Michael and Diana Ross. Smartly, the production uses many lesser known songs, clips, and interviews to create a "new" feel to the show.  Only true and obsessive fans (like me) will know where much of the clips and music comes from.  Bad is a more literal re-imaging of the music video, with a kind of street gang, a New York subway backdrop and graffiti and B-Boy stances.  Smooth Criminal, another one of my favorite parts (and if the screams and clapping were any indication, a crowd pleaser) includes choreography from the video, and that iconic synchronized lean, still a moment that is magical and one that makes you ask, "how the hell did they do that?"  The Dirty Diana/In the Closet mash up is not only a kick ass song (that I want NOW) but also an amazing re imaging of an iconic MJ song.  All I'll say about it, is that a stripper pole is involved!  Earth song is probably one of the most visually amazing moments, using shadows and projections, and one that Michael himself would have endorsed, maybe even done.  Billie Jean, a clear crowd favorite, truly AMAZES!  I can only imagine the pressure of taking Michael's most iconic song and performance and doing something new with it.  If they were worried, they shouldn't be, Cirque totally succeds and makes their own iconic moment!
For me though, the evenings BEST moment was Man in the Mirror.  Hands down my favorite song by Michael, so that helped, but the moment is truly enchanting, surprising, and magical.  I won't ruin the moment by telling you anything more, but it truly was a highlight and amazing. 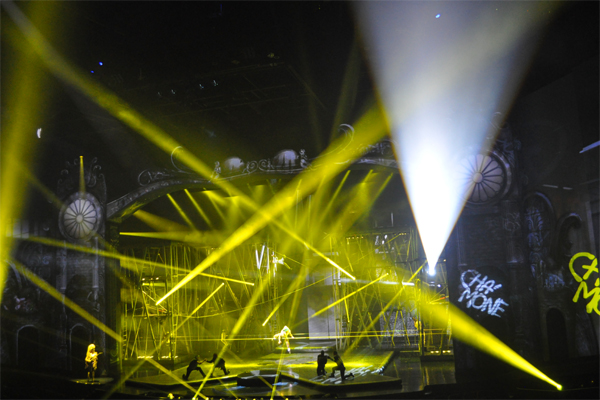 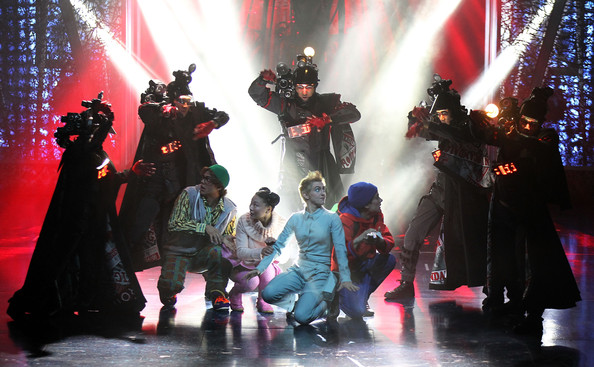 I think the show succeeds on many levels, it uses Michael's music appropriately, to entertain and to tell stories but to also remind us all of our responsibilities to the world and to each other.  The title, ONE, is not arbitrary, it is really the overall theme of the show and message.  One People, One Nation, we are all One.  It's in my opinion that if Michael was alive today, he'd be very happy and proud of this show and it's message.  It's bittersweet that the show IS so good because it's a reminder of how great Michael, and his message of peace, really was!  I was filled with a kind of sadness as I walked away from the theatre knowing that this type of Michael themed show is as close as I'll get to seeing Michael perform and make his magic. 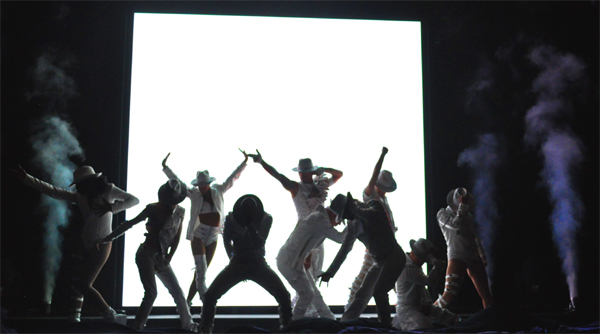 Die hard fans and casual fans of MJ, plus fans of Cirque du Soleil will greatly enjoy this show.  It gives audiences what they want....entertainment with a few surprises.  I think that this show will be around for many, many years and is a great addition to Las Vegas!  If you get the opportunity, I recommend you check it out!

For more information or to purchase tickets, click below: 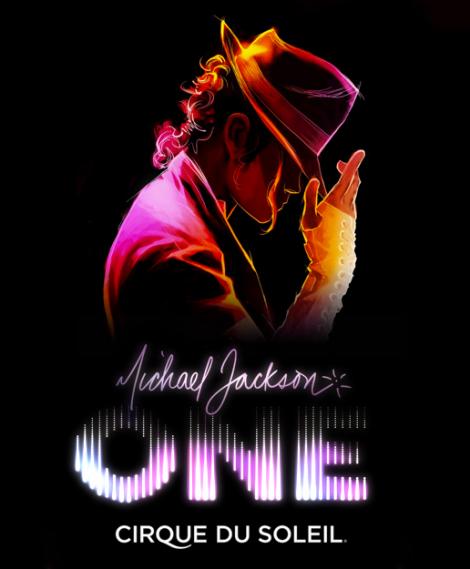 Posted by GetPaulHoward.com at 4:20 PM

Email ThisBlogThis!Share to TwitterShare to FacebookShare to Pinterest
Labels: Paulisms